Last month Black Library released a collectors edition novella for the Horus Heresy. It is called Promethean Sun (do you underline or italicize novella names?). I believe that it is primarily about Vulkan and the Salamanders Legion, battling against Exodite Eldar; however, two other primarchs and their legions also feature. Not having read it yet, I'm not sure how the focus breaks down.

I bought one for myself and one for a friend who plays Salamanders Space Marines and Eldar. The novella will make the perfect b-day present for him. I myself am not a huge Salamanders fan. Of course I think they are a cool legion, but I would say the same for any of the legions (except for the Imperial Fists, who I would rate as freaking awesome). It's just that I don't have any special appreciation for the Salamanders, relative to the others. My desire for owning and reading the book comes simply from it being a collectors item dealing with the Horus Heresy. 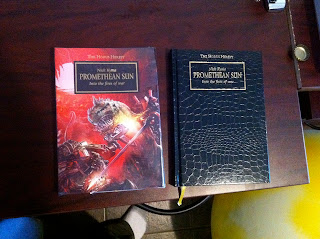 Novellas with and without the sleeve 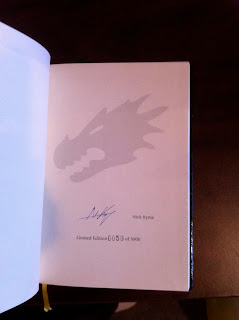 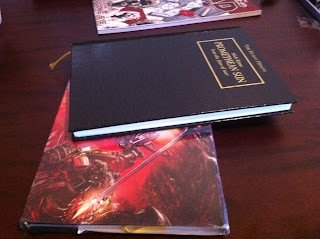 In other news, I have solved the problem with my airbrush. It wasn't the airbrush at all. The compressor I was using is not suited for prolonged use. After 20 minutes, it would overheat, the air coming into the airbrush would be hot and dry the paint, clog the nozzle, and shut down my spray painting fun.

I borrowed a much higher quality compressor from a friend. The thing turns itself off when you stop spraying with the airbrush. Awesome. It also has a vapor chamber to keep moisture in the air from diluting your paint and changing the consistency of the paint coming out of your airbrush while you're painting. Doubly awesome.

As a result, I finished basecoating everything (that was primed) on Monday night. Didn't take long to do at all. The army is coming along nicely. Below is a quick preview. The lighting was was poor, but I promise that the models do, in fact, have light blue grey paint on them. Once I get a model completely finished I will borrow my friend's photo booth thingy. 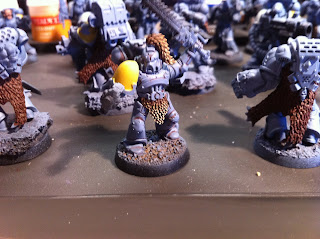 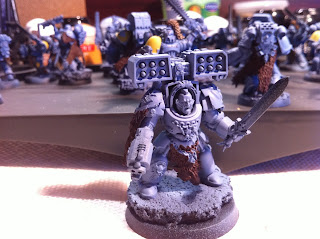 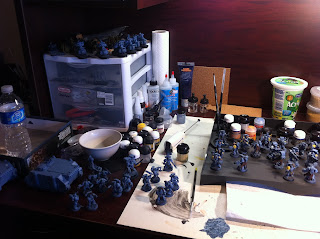 Dystopian Wars, Fed up with airbrush

Last night I played a game of Dystopian Wars. It was rather fun. A friend of mine bought the mega bundle, containing the starter boxes for all four fleets currently available. I played with the American (FSA) fleet and bought it from him after the game. Their play style was appealing. The FSA ships are effective at long range and can take a good beating. This is a nice change from my space wolf force, which is effective at mid range and in the assault. When I got home I ordered the carrier and scout airships. The models are really nice, highly detailed, and require little to no assembly.

The size of the ships surprised me, as did the level of detail. 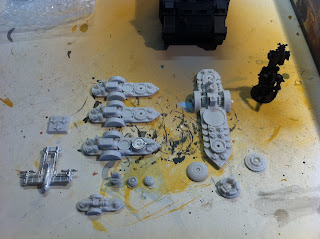 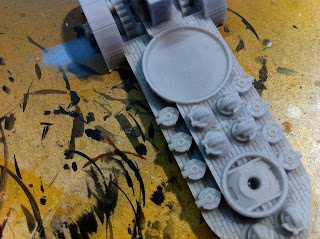 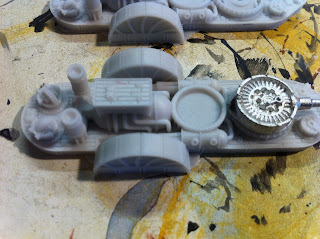 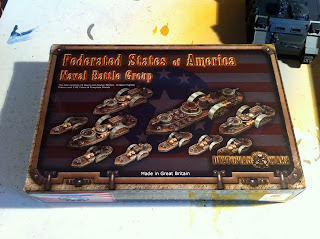 If you have played Battle Fleet Gothic, then Dystopian Wars will not be too unfamiliar to you. There are several notable differences in game mechanics. BFG has modifiers to hit depending on ship vectors. Dystopian Wars does not. Instead, in DW you will typically hit on four's. However, the number of shots you have will depend on how far away you are from your target.

I began base coating my Space Wolf army tonight. Everything was going fine until paint stopped coming out of the airbrush. I'm not sure what the problem was. The paint mix was fine. This has happened every time I've used the brush, and I no longer think the problem is with me. Tomorrow I'll be purchasing an airbrush from a different manufacturer.
Posted by Sigismund at 8:51 PM 4 comments:

One year of law school is now under my belt. The last term was busy, and while it has been 4 months since my last blog post, it has not been four months since I last worked on something for my Space Wolves. I have assembled most of an 1850 point army, including this: 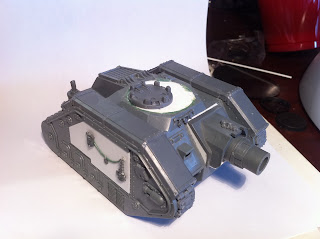 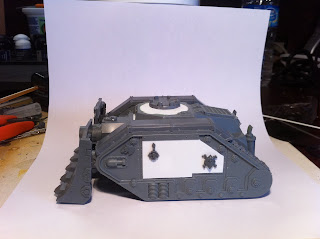 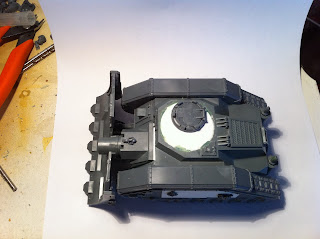 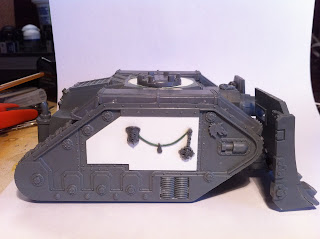 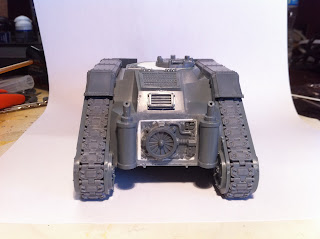 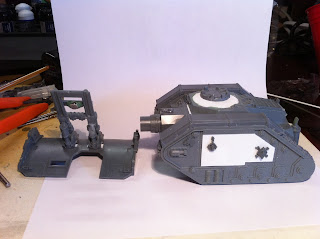 Leman Russ found the STC for the tank bearing his name, and damnit, my army is going to include one! And there it is, in converted form. I wanted a Leman Russ tank and a vindicator in the army, and this covers the both of them.

The siege shield, cannon, and vent at the back are from the Vindicator sprue (thanks ebay). The hull is from the old Leman Russ kit. No idea if the new kit would result in any difference.

Looking back, this conversion would have been fairly easy if I had known what I would be doing before I did it. As it happened, I put the Russ together, and then did the converting work. Made things more difficult, and next time around I would do things in reverse (proper) order.

I tried doing a rope on the side of the tank, similar to Night Runner's wolf tooth necklaces.  You can see his excellent tutorial here.

I managed the rope. The teeth were beyond the patience level I was currently possessed of. Instead I took the rune from the bottom of the storm shield in the Wolf Pack kit. Note: make sure the surface you roll out the rope on is completely clean. Any bit of debris that is picked up is hard to get off.

Basecoating the army will soon commence. Priming is done (except on the vindicator).

I plan to post my thoughts on 'counts as' models sometime next week. My vindicator is counts as, and so I wanted to say a few things on where I think the line between acceptable and not acceptable for using such models is.
Posted by Sigismund at 1:13 PM 2 comments:

The Astronomicon tournament organizers run annual events in Vancouver, Winnipeg, Toronto, and Dallas. They're also hosting a tournament on a cruise ship this year.

My friend and I are planning to attend the tournament in Vancouver this summer. It's supposed to occur in August, as it normally does. We're going to make a trip out of it with the girlfriends. Spending a week in southern BC is always fun. Mountains, wine country, Vancouver, then back to wine country, back over the mountains, and home (I live in Alberta).

The tourney format sounds really cool. You can find it in their rules section on their website: Astronomicon home page.

Is anyone else thinking of going, or interested in doing so after reading how these tournaments are run?

Missions are designed by the organizers, and are made to suit the terrain on each particular table; and the terrain is varied so that sometimes an army will have an advantage, and other times the player will have to get creative to win.

They even give away an award for best list. I don't mean unit selection. I mean the physical representation of your list. One guy one year turned in a guardsman's field kit, complete with the Infantryman's Uplifting Primer from Black Library, with his list and other papers inside.

If you listen to 40K Radio, you can hear an interview with the organizers in an episode from not too far back.
Posted by Sigismund at 9:00 PM 1 comment:

I happen to have a Leman Russ tank, still in the box. One day I would like to build a small Valhallan Imperial Guard army, and it was on sale at a big discount. How could I resist? Anyway, now that I have a Space Wolves army, I am considering using it to represent a Vindicator. As many will know, the Space Wolves could take Leman Russ tanks before the latest codex came out. Their Primarch is the one who found its STC design.

What do you think? Cool idea, lame idea?

The biggest issue I think is whether it would give me an advantage in game. I don't think it would. The tank is taller, meaning I'll have a harder time getting out of line of sight or getting a cover a save. Also, I can use the hull mounted gun to measure and draw line of sight from, so the raised turret wouldn't help me see and shoot enemy units that a Vindicator model could not.

I know that the people I play friendly games with will think its cool. I'm concerned about tournaments though.
Posted by Sigismund at 11:17 PM 2 comments:

This guy will count as a wolf lord, or battle leader. Or maybe just a regular wolf guard. Depends on the game. The right arm was originally holding a thunder hammer, but I wanted a frost blade instead.

I haven't decided if I like the model better with the wolf's leg hanging off of the left shoulder. If I leave it off, I'll add some green stuff in the space above the shoulder. 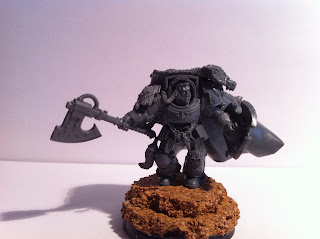 The right shoulder pad is from Forge World. It's not the pad I wanted to use, but it fit much better. 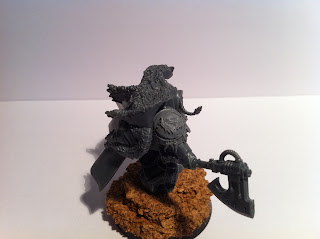 And the little conversion: 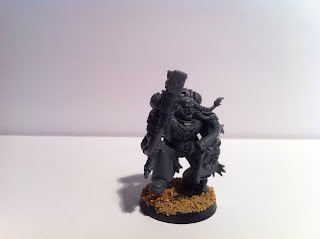 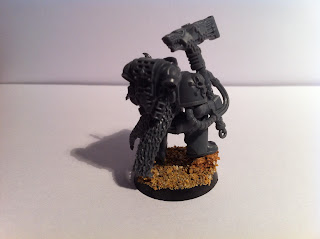 The right leg is from the Devastator box. It's for the marine you can have kneeling. I just did some simple sawing and glueing.

Warhammer World, My Girlfriend is Awesome

My girlfriend was in Europe before Christmas. Before her flight home from London, she made a trip up to Nottingham just so she could go to Warhammer World to get me a Christmas present. She only knew about Warhammer World because I had told her that I wanted to see it one day. She emailed my friend who sent her a list of things to pick up.

This is what she came back with. I was shocked and beyond delighted. I had no idea she had gone there. 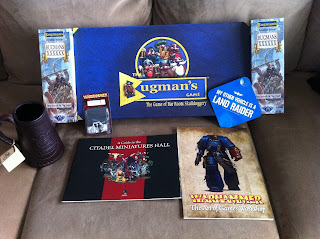 Bugman's board game, Bugman's leather mug, Bugman model, two bottles of Bugman's beer, a Warhamer art book, a book on citadel minatures and the citadel display hall, and a sign that says "My other vehicle is a landraider."

All exclusive to Warhammer world. All fantastic.
Posted by Sigismund at 3:03 PM 3 comments:

Sigismund
I have been in the hobby since 2009. The blogs of other hobbyists have been wonderful sources of information and inspiration. As a result, I started this blog in the hope that it may occasionally pass on useful ideas to others.